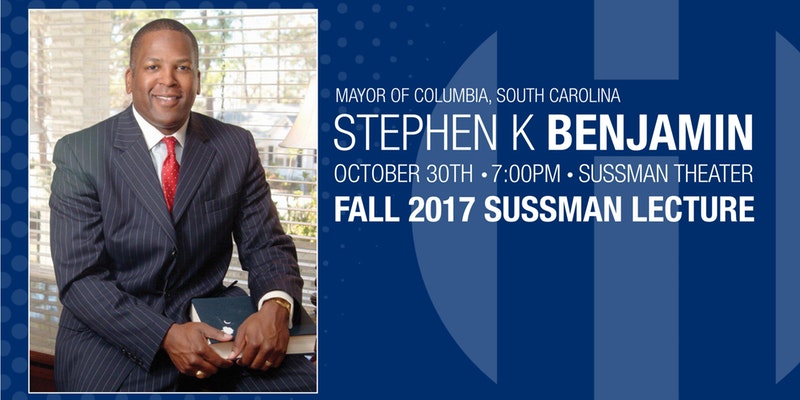 Benjamin and the city of Columbia have confronted many of the social issues faced by local governments across the country, including ongoing conversations about race, equality and the role of monuments in our society, sanctuary cities and creating welcoming environments, and how cities have become more proactive in the face of state and federal government inaction.

Benjamin was first elected Mayor of Columbia, South Carolina in 2010 and currently is seeking his third term in office. He serves as vice president of the United States Conference of Mayors and will assume leadership of the organization in 2018. Benjamin has been praised as a thoughtful, innovative leader on issues facing Columbia and American cities in general.

As the capital city of South Carolina, Columbia has been at the center of ongoing discussions about how and where to display Confederate symbols and in 2015, the Confederate battle flag was removed from the South Carolina Capitol grounds.

Earlier this year, Benjamin joined mayors across the country seeking clarification from the federal government on how local authorities should enforce immigration policies and potential consequences for communities that identify themselves as “sanctuary cities.”

“The purpose of the Sussman Lecture Series is to engage students and the public in discussions on significant contemporary issues,” said Joseph Jones, executive director of The Harkin Institute. “We are thrilled to have Mayor Benjamin here to discuss and share his insight on these important challenges facing all of us, from residents in Columbia, South Carolina to everyone in Des Moines, Iowa.”

The Sussman Lecture on Oct. 30 is free and open to the public, but registration is required. The event will begin at 7 p.m. in Sussman Theater in the Olmsted Center at Drake University.