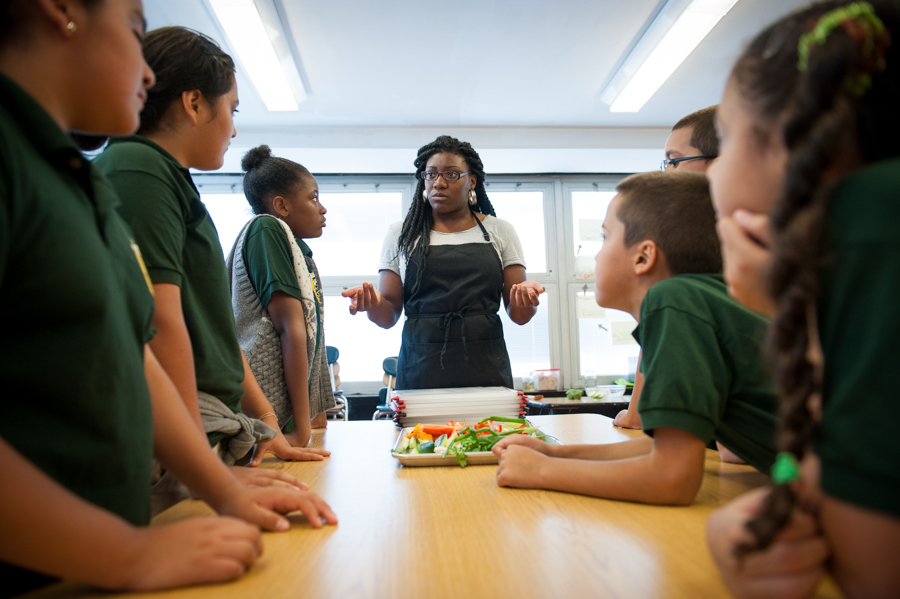 The Fresh Fruit and Vegetable Program (or FFVP) was created to provide exactly what is stated in the title, fresh fruits and vegetables. From the time Senator Tom Harkin (retired) authored the bill to establish this program, it was meant to expand the tastes and knowledge base of children across the United States. Unfortunately, there are many reasons why children are not exposed to fresh fruits and vegetables early in life. Fresh produce is often more expensive than readily available processed alternatives including fruit canned with added sugar or vegetables with high amounts of sodium. Some food scientists contend those steps are necessary to maintain the quality and palpability of the food. However, a dietitian will argue that these changes greatly alter the nutritional value, especially as it compares to fresh alternatives. Furthermore, the FFVP specifically funds schools with high rates of free and reduced-price meal enrollment affording many students access and exposure to different fresh fruits and vegetables they might not have access to at home.

This program is unarguably beneficial to American children. Since its inception in 2002, students who receive FFVP snacks eat approximately one-third a cup more daily fruits and vegetables than students in schools that do not participate. Those benefits are observed beyond the school walls. When students are offered FFVP snacks, they tend to eat more fresh fruits and vegetables outside of school and have a more positive attitude towards fruit and vegetables. The program is setting children up for success, both now and in the future by encouraging a healthy eating habit.

Unfortunately, this low-cost program that gets more fresh fruit and veggies into the mouths of children is constantly under attack, and not necessarily in a way one might assume. Although the program is meant to provide fresh produce, as its name makes clear, fruit and vegetable processors and canners consistently lobby for the inclusion of canned, frozen, and dried fruit and vegetables in the program. This change would run contrary to the program’s mission of increasing exposure to and intake of fresh fruits and vegetables while improving diet quality in a population that might not otherwise have the opportunity to eat fresh produce on a regular basis.

The current House farm bill includes an amendment to the FFVP that allows the purchase of canned, frozen, and dried fruits and vegetables with FFVP funding. A pilot program included in the 2014 farm bill shows why these changes should not move forward. The pilot program introduced a version of the FFVP with canned, frozen, and dried fruits and vegetables in four states, Alaska, Delaware, Kansas, and Maine. An evaluation published in 2017 shows that the addition of alternatives to fresh produce has a detrimental impact on students who participate in the FFVP program.

What they found is that most common items provided to students were dried and canned fruits, not frozen:

Another unintended but importance consequence of the addition of adding canned, frozen, and dried alternatives:

The change from fresh to canned, frozen, and dried options is an even greater cause for concern. Specifically, an increase in dried and canned fruit resulted in less nutritious options:

Unfortunately, the change in use and offerings of fresh produce lead to changes in the overall school food meal environment:

There is no evidence to support the claim that students will eat more canned, frozen, or dried fruits and vegetables than they will fresh options. Participation rates in the program did not change. Overall, students ate less fruit overall – including less fresh fruit – but ate more dried fruit.

It is important to note that School Food Directors were satisfied with the changes for a few reasons. First, it increased the variety of snack items they could pick from and purchase. Second, they reported that canned, frozen, and dried foods are more reliable and can be served in a pinch or as a back-up option. However, School Food Directors, parents, and students were also happy with the program when it only offered fresh options. A survey found that two-thirds of parents said they wanted the FFVP to stay the same, and only serve fresh produce.

This leads us to ask, “Why fix something if it isn’t broken?” Furthermore, “Why ‘fix’ something that would lead to negative, unintended consequences such as decreasing diet quality, the overall fruit intake of our children, and potentially impact long term behaviors?”

The positives of the change, specifically the ease of implementation noted by the School Food Directors, do need to be addressed but not through alterations to FFVP. There should be more done to help School Food Directors add variety to snack and meal options without sacrificing the health of the children they serve. Regulations on purchasing practices and the overall school service food system – from distributors, pricing, and transportation methods to school storage and service options – should change to better serve those feeding our children.