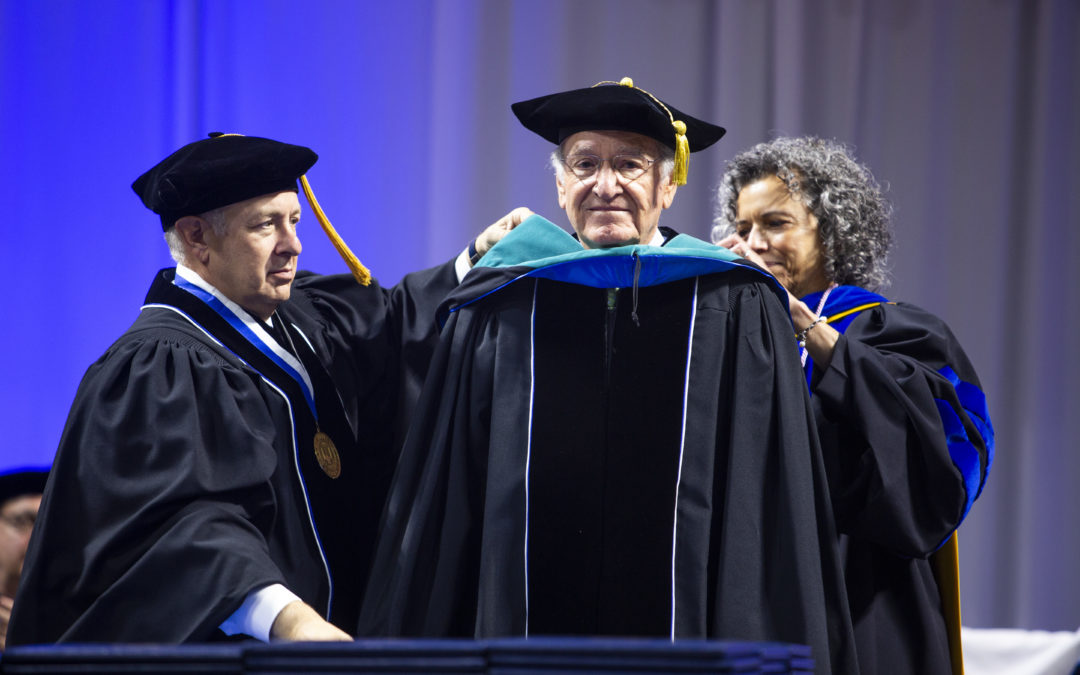 Senator Tom Harkin (retired) has received an honorary degree from Drake University for his commitment to the state of Iowa and his career in public service.

“Thank you to the Drake family for this great honor today,” Senator Harkin said during remarks at the commencement ceremony. “The Harkin family just couldn’t be happier than with our association with Drake.

Senator Harkin offered some advice to the Class of 2019.

“But I submit that that easy road is a dead end. Remember, the real value of life and work isn’t measured by the money you make. It’s measured by the difference you make. The lives you change. The people you help. The work you do to make this a better world for all.”

Senator Harkin shared the stage with F.A. “Art” Wittern, Jr., chairman of the board and former president and CEO of the Wittern Group, a third-generation, family-owned vending equipment manufacturer based in Clive, Iowa. Wittern received an Honorary Doctor of Business Administration.

Senator Harkin shared a story of working with Wittern to help pass the Healthy, Hunger-Free Kids Act of 2010. As Senator Harkin and other advocates were pressing for healthier food choices in schools, they ran into trouble addressing the options available in school vending machines.

Wittern and his team were heavily involved in the Healthy Vending to Schools Initiative and provided new vending machines capable of keeping fresh food cold and other healthy options warm.

“Thank you, Art Wittern and the Wittern group for getting better food to kids in schools,” Senator Harkin said in his remarks.

In a release announcing the honorary degree recipients, Drake University President Marty Martin said, “As we gather to celebrate the achievements of our Class of 2019, it is an honor to also recognize Senator Harkin and Mr. Wittern, two loyal Drake supporters whose achievements in public service and business have had a transformative impact on our communities, both locally and globally. They are inspirations to us all, and we are honored to have them as members of the Drake family.”