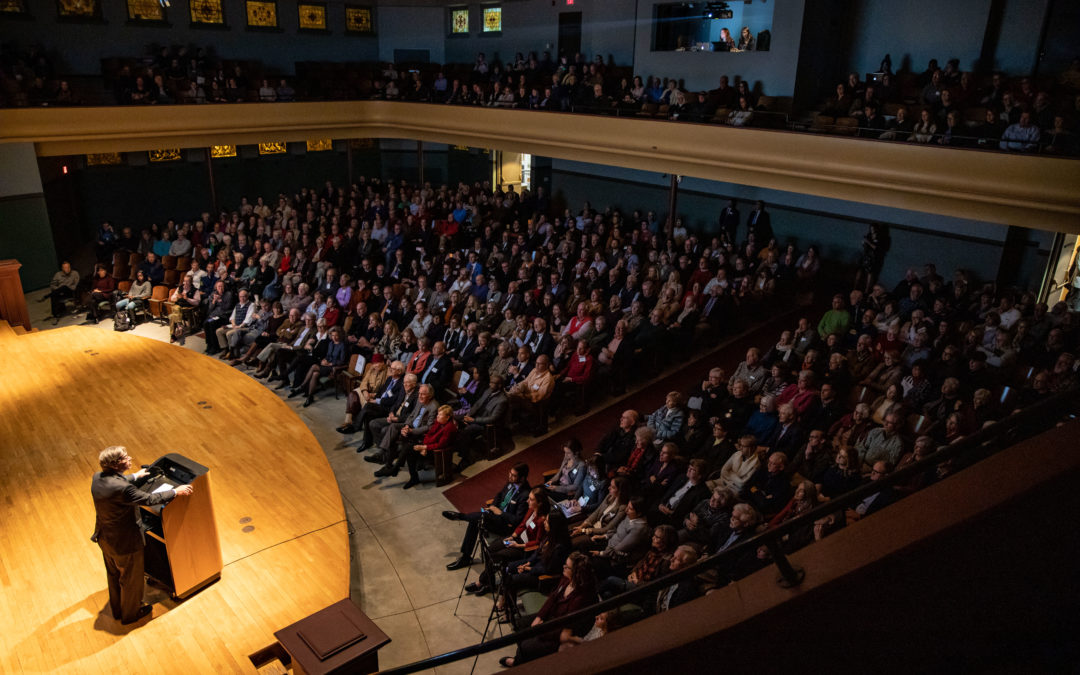 Watch video of An Evening with Charlie Cook

On November 4, The Harkin Institute for Public Policy & Citizen Engagement hosted distinguished political analyst Charlie Cook for a lecture on the state of political affairs in America. Cook provided his insights on numerous topics, including the Trump presidency, the impeachment proceedings, and the upcoming 2020 elections.

Cook began his lecture by sharing his thoughts on the current state of Donald Trump’s presidency through analyzing polling trends. Cook noted that of the 372 major polls released since the start of Trump’s presidency that measure his approval and disapproval ratings, only one has Trump with a higher percentage of people who approve rather than disapprove of his job as president.

To provide context, Cook stated that it took President Obama more than 500 days of his presidency to receive a disapproval rating of 50 percent, whereas this occurred eight days into President Trump’s tenure in office.

For President Trump, however, the range of his approval ratings is smaller than compared to other presidents; Cook conjectured that 35-40 percent of American voters will support the president no matter what. Cook called these voters the “Fifth Avenue” voters, alluding to Trump’s claim that he could shoot someone on Fifth Avenue and not lose any votes.

Cook pointed out that Trump’s favorability ratings are unlikely to drop or expand much further.

“To expect something to drop that never did really rise is like expecting your pre-shrunk jeans to shrink,” Cook said. “They’re not going to, they came that way.”

The Democratic Party, meanwhile, is in the middle of determining their nominee for president in 2020. Cook said that the Democrats are split into two camps: the restorationists and the revolutionaries.

The restorationists want the country to return to the way it was before President Trump. The revolutionaries are advocating for greater systemic change.

According to Cook, the conflict between the two camps can be seen in the debate regarding “electability.” Cook said that because the Democratic Party is so focused on defeating President Trump in 2020, Democratic voters are strongly considering voting for the presidential candidate that they think is “electable,” even if that means voting for someone who otherwise would not be their first choice.

Cook analyzed the Democratic presidential candidates for 2020 and discussed their prospects for capturing the nomination. Cook argued that Massachusetts Senator Elizabeth Warren has a well-crafted stump speech and will eventually capture the progressive side of the party.

However, Senator Bernie Sanders of Vermont will be battling with Warren for those votes and will likely hang around for much of the Democratic primary. Warren has faced more scrutiny for her plans, which Cook said “makes the New Deal look somewhat modest.”

Cook said voters who are considering these candidates have allowed the perfect to become the enemy of the good. Cook argued that each candidate has weaknesses: Biden is seen as too old and verbose, Buttigieg is seen as too young and inexperienced, and Klobuchar is seen as unexciting. Because they are all competing for votes, Cook projected that this Democratic primary could go on for a long time.

Cook shared some thoughts on the upcoming general election in 2020. The strategy for the Trump team, Cook said, was to “organically grow their base enough to offset not having to win over swing voters.” This plan may not be successful again for President Trump; Cook quipped that Trump is like “the guy that plays poker for the first time in his life and gets a royal flush and thinks it was skill.”

Cook stated that President Trump may not find it easy to hold on to Wisconsin, Michigan, and Pennsylvania, and that it will be essential that the large turnout in rural areas in 2016 occurs in 2020 as well.

Furthermore, Cook argued that the key demographic group that will tip the scales in the next election is people who live in the suburbs. These voters are the ones that helped the Democratic Party retake the House of Representatives in the 2018 midterms, and Cook thought that the Democratic Party will try to hold on to that support in the 2020 elections.

Cook moved away from the presidency to discuss the United States Senate. For the first time in history, in 2016, each state that had a U.S. Senate election voted for the senator and presidential candidate of the same party. The U.S. Senate currently consists of 53 Republicans and 47 Democrats, and the 2020 election, meanwhile, looks to have close contests.

Indeed, Cook identified some seats that are up for reelection that may be vulnerable. The Democrats will have to defend the seat they gained in Alabama’s 2017 special election. The Republicans, meanwhile, will face stiff competition in Arizona, Colorado, and Maine. Cook predicted the likelihood of the Democrats taking back the Senate is between 30-35 percent.

The event then transitioned to a question-and-answer session. Cook was asked about the future of the Republican party under the Trump presidency. He said Republicans are supporting the president at high rates and that our country is voting on culture and partisanship more than the economy.

The audience was also curious about the value of polling, to which Cook responded that polls are still relatively accurate, but caller ID and voicemail have made it more difficult for pollsters to connect with likely voters.

Cook also expressed concern that people who are qualified to run for political office are not doing so today because of past actions that may be publicized.

When asked if the electoral college will ever go away, Cook argued that the presidential election system is unlikely to change. The audience inquired what Cook thinks the three main issues of the upcoming election will be. Cook posited that issues will not be a top concern of voters in 2020; instead, it will likely be an up or down vote on President Trump.

As for the future of American democracy, Cook noted that unlike in the past, the world is not relying on American leadership anymore today. Cook wrapped up his lecture by expressing hope that young people will become more politically engaged.