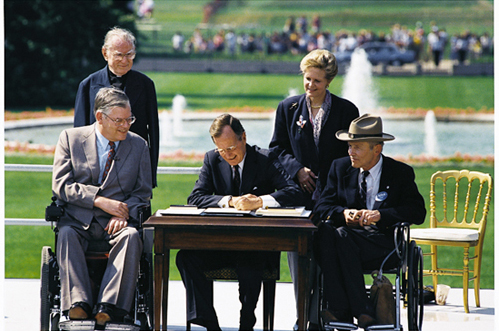 On Tuesday July 21st, the George & Barbara Bush Foundation will convene key activists, advocates and policymakers who helped make the Americans with Disabilities Act a reality for a bipartisan celebration of that landmark civil rights legislation – and, equally important, focus on the challenges that will shape the future of the disability movement. The 90-minute online program, titled “Let the Shameful Wall of Exclusion Come Down,” taken from President Bush’s remarks on July 26, 1990 as he signed the ADA, starts on July 21st at 1:30pm Eastern and will be moderated by Judy Woodruff, the managing editor and anchor of PBS’ NewsHour.

The National Organization on Disability and Lex Frieden of TIRR Memorial Hermann have worked closely with the Bush Foundation in planning this year’s commemoration, which will also feature contributions from Higher Ground Productions and their “Crip Camp” film recently released on Netflix; the Edward M. Kennedy Institute for the United States Senate, the Robert J. Dole Institute of Politics at the University of Kansas, and the Harkin Institute at Drake University; and President Bush’s former White House advisors C. Boyden Gray and Governor John Sununu.

“President Bush fervently believed in and worked for the ideals of the ADA to help make it reality, but he always recognized that landmark civil rights legislation could not have become law without the courage of so many activists and the dedication of legislators and policymakers on both sides of the political aisle,” said Andy Card, Interim CEO of the George & Barbara Bush Foundation. “He would also be the first to say that this vital work is not finished, which is why our ‘Let the Shameful Wall of Exclusion Come Down’ event will also have a robust conversation on the challenges disabled American citizens still face today. George Bush would want us to be focused on working together to find solutions.”

“President Bush knew that our success in the world depends on how well we inspire and put to use the talents and energies of every person in this country,” said Tom Ridge, Chairman of the National Organization on Disability. “It was his vision that no ability is to be wasted, and that everyone has a full and equal chance to play a part in our national progress. There is still much work left to do to see his vision fulfilled, and we hope this program will inspire corporate leaders to up their game and hire more people with disabilities.”