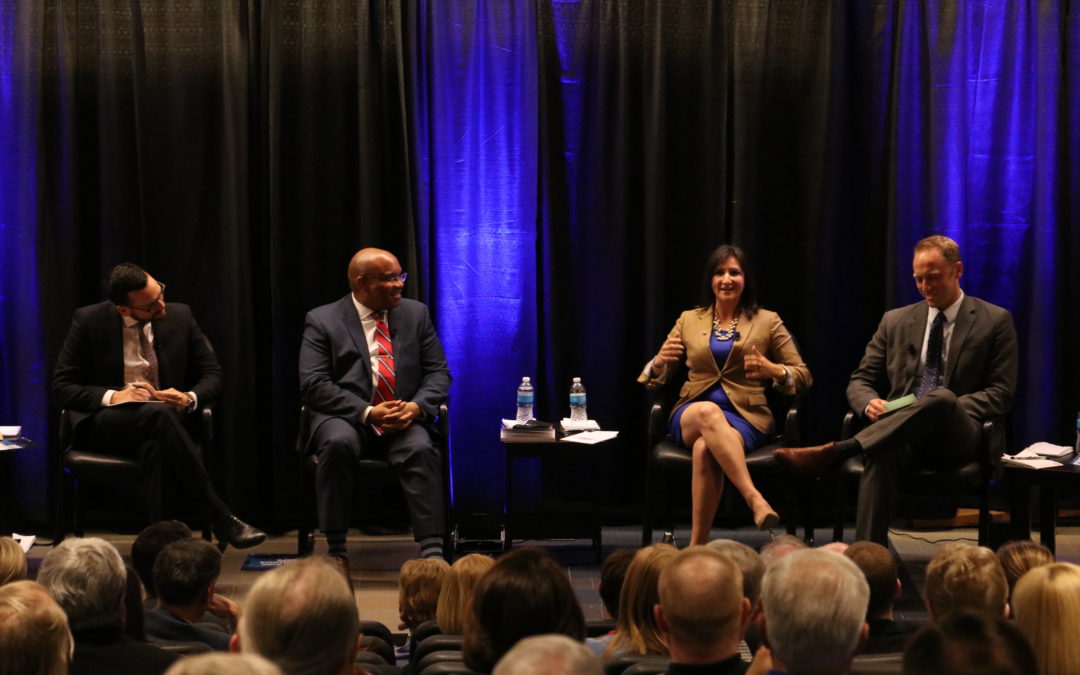 On April 12th, at the ninth Sussman Lecture put on by The Harkin Institute for Public Policy & Citizen Engagement, attendees were treated to an in-depth conversation on national security and some of the greatest issues facing the United States today. The off-the-record conversation was guided by a panel of top national security officials who agreed to let us share some of highlights from the discussion. The conversation focused on how the U.S. can prioritize limited defense resources while upholding America’s strategic interest. Several key topics of the evening included promoting bipartisanship, past diplomatic issues America has faced, how global democracies affect national security at home, the pillars of decision making, and the internal battle of quick response versus long term effects on American prosperity.

Promoting Bipartisanship
In a country so heavily divided, the importance of bipartisanship can be shown in strategically combatting both domestic and international terrorism. The threats America is now facing are no longer traditional but have become asymmetrical. With the intensity of our global threats increasing, the need for the country to define what it truly means to be an American is more important than ever in order to promote democracy. American democracy means that our citizens have the right to be educated on the issues that this country is facing, emphasizing that hidden attacks on U.S. citizens is something that simply does not align with American beliefs. Outside forces want nothing more than to amplify America’s internal issues to try to tear the United States apart from the inside out, creating another layer of national security This is why it as crucial as ever to use bipartisanship to bind this country together.

History’s Role
This country simply cannot discuss the threat of national security without discussing the role history plays on making decisions. Before September 11, 2001 terrorism was thought of as an overseas threat that required military efforts abroad. People did not consider the possibility of a homeland attack in the U.S. until it occurred on 9/11. Promoting democracy in global affairs can be traced back to post-World War II, when the United States started placing the value of freedom into every platform this country stood on. The attacks on 9/11 became a wakeup call to the country and created a sudden movement to tear down the wall between law enforcement and FBI intelligence teams. If the U.S. cannot keep its homeland safe, then what is the point of having troops abroad? With the creation of the National Security Division in 2006, the issue of national security turned to focus on both reacting and proactively preventing any future attacks on American soil.

An attack on America’s homeland made it clear that the greater effort must be taken to identify and prevent attacks. One ongoing dilemma the country faces is the battle between acting quickly to prevent attacks and wanting to know this country is doing the right thing. It is a constant tug of war for decision makers. The true battle for officials is making morally correct decisions all while upholding the country’s best interest. Often times, military and diplomatic leaders are encouraged to find immediate solutions. With creating a balance between strategy and solution, leaders must also achieve long term interest as well. Creating a solution should not come at the expense of compromising American values, which run deeper than doing what is morally right. American values should strive to promote democracy.

End, Ways, and Means
Academically, it is important to discuss how officials need to learn more about the foundational principles for making military decisions. What exactly does it take to protect the United States? When lives are at stake, the most important thing that matters is expertise and an understanding by decision makers of the potential consequences of their actions. National security decision making can be broken down into three pillars: End, Ways, and Means. Ends discusses what the United States hopes to achieve upon resolution of the security threat. How will the end results reflect on America’s position on the global scale? Ways defines the tools available to complete or deter an action. Will the U.S. need to investigate new methods to find a solution that works best for the country, or is it already prepared? Lastly, Means addresses the fiscal issues from those who will provide finances necessary to come to a solution.

Regardless of America’s issues with national security diplomacy, there is hope that a peaceful future is on the horizon. Democratic institutions have stood the test of time and history shows that democracy works best when the electorate is engaged. Engagement and communication are key components needed for the U.S. to increase national security and continue to thrive.